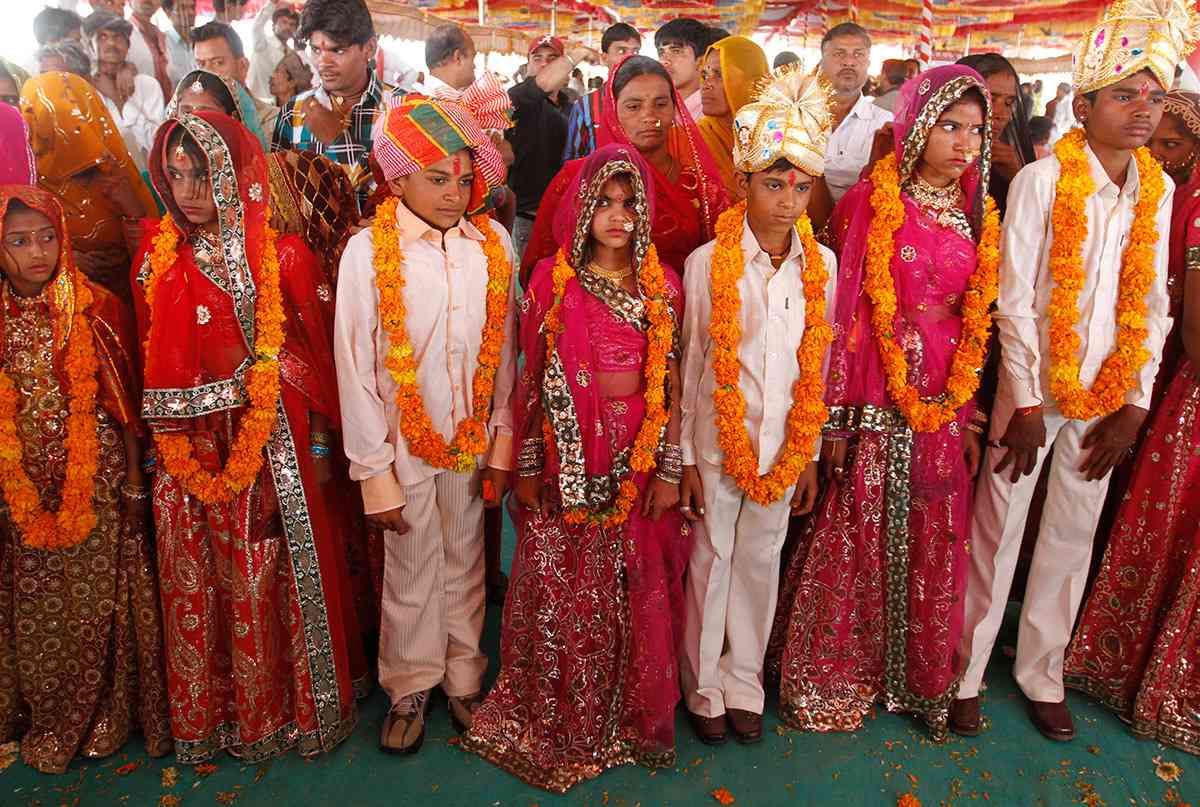 Child marriage in India persists amidst child protection laws. Protecting children from this menace needs multipronged tactics besides breaking false beliefs. India has a high prevalence of child marriage with at least one in three child brides in the world being from this country. The Prohibition of Child Marriage Act 2006 declares that marriage before the legal age of 18 for girls and 21 for boys is punishable.

Child protection systems are the bedrock to prevent child marriage. They mitigate risks that heighten vulnerabilities for children and adolescents.

Despite an awareness of the law, and of the consequences of child marriage on the sexual and reproductive health of girls and young women, the gender disparity and a disregard for women in society prevail.

WHO IS A CHILD?

According to Article 1 of the Convention on the Rights of the Child, 1989, “a child means every human being below the age of eighteen years unless, under the law applicable to the child, the majority is attained earlier.” Therefore, International Law gives the status of the child to persons who are below eighteen years of age.

Different definitions of ‘child’, according to different Indian laws:

Every law is formed with different objectives and therefore, to solve the purpose of their establishment, ‘child’ has been defined differently. However, the different definitions of ‘child’ in Indian Laws create ambiguity and confusion.

The Indian Supreme Court issued a landmark decision (Independent Thought v Union of India), which narrowed the scope of the ‘marital rape exemption’ in India.

Rape is defined under Section 375 of the Indian Penal Code 1860 (IPC) to include certain non-consensual, sexual acts committed by a man against a woman. Where the woman is under the statutory age for sexual consent, the sexual acts are understood as rape regardless of the victim’s consent.

The provision recognizes the vulnerability of children by creating the legal fiction that nobody younger than 18 years has the capacity for sexual consent. Exception 2 to this provision clarified that sexual acts between married couples were not covered by Section 375 unless the wife was below 15 years of age. A marriage involving a woman younger than 18 years is prohibited but voidable, which means that the minor can approach the Court to invalidate it till she is 20 years old.

The Protection of Children from Sexual Offences Act 2012 (POCSO) and the statutory rape provision criminalize any sexual activity carried out with persons younger than 18 years. These provisions recognize the emotional and physical damage inflicted on those who are subject to sexual acts while still sexually immature. The classification sent the conflicting message that this damage can be disregarded for married victims who are 15 years or older. Similarly, while the marriage of those under 18 years old is prohibited, the classification effectively condoned child marriages, by not extending the label of ‘rape’ to sexual acts forced by husbands on some child brides. 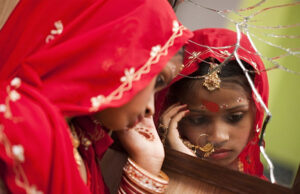 Gender equality? Is this consideration really aiming at it?

While this move seems to be a positive one for women in India that will allow them to get married and have children later, digging below the surface reveals a huge expectation and reality mismatch. Raising the age of marriage from 18 to 21 for women will lead to an increase in the parental backlash against young adults who marry against the wishes of their parents or elope and will lead to the criminalization of sexual activity.

83 High Court and District Court judgments and orders between 2008 to 2017 and found that in 65% of the cases PCMA was used to punish elopement of two consenting older adolescents. In the remaining 35% of cases of child marriage, the PCMA was invoked in more than half of them to seek dissolution of marriages that didn’t work and not to punish the parents for breaking the law.

In 2015-16, 63% of young women got married under the age of 21. If the government went ahead with raising the minimum age of marriage, then it is very likely that these 63% (that number becomes 75% in the poorest section of the population) of women and their families, would become liable to criminalization that’s over half the country.

Society believes that early marriage prevents sexual violence, protects the purity and honor of families, requires a lower dowry, and prevents elopement. Marriage and chastity are deeply connected to notions of purity and honor of the family. Girls are further seen as financial burdens who need to be married off at a young age. Early marriage is so normalized in India that even government functionaries often do not play their part.

Investing in education and employment opportunities and specific efforts to break negative social norms would lead to a radical shift in norms and aspirations for girls, and a willingness to invest in them and delay their marriages. Investing in girls’ education is viewed as an unnecessary expense.

It is largely SC & ST girls who lose out on education, and therefore tend to get married at younger ages. NFHS data shows that 42% of ST women and 33% of SC women have received no education. The education system is clearly failing Dalit and Adivasi girls. Now, this failure will be exacerbated when its consequences early marriage will lead to the criminalization of their families.

Girls end up dropping out of school due to the poor quality of education, lack of infrastructures like toilets, the prevalence of sexual harassment, or poverty – which then leads to early marriage. Investing in secondary and higher education for girls has been proven to decrease rates of early marriage.

So, an effective measure would be to educate women and not increase the age of getting married.

Early marriage tends to predominate in poorer communities. Over 75% of girls get married below the age of 21. The poorest 20% of our population comprises largely of Dalit & Adivasi communities with 45.9% belonging to scheduled tribe households, 26.6% from schedule caste households, compared to only 9.7% of the ‘General’ category. These households, who already face the brunt of societal violence and discrimination, will be further criminalized if the minimum age of marriage is enforced at 21.

The fertility rates are already dropping in India. Clearly, people from across the socioeconomic spectrum are having smaller families even those who get married at young ages. Regulating the minimum age of marriage then has little to no impact on fertility rates, which are dropping anyway.

For many young people, marriage is viewed as the only ‘honorable’ way through which to explore their sexuality or have a consensual relationship. For those in inter-caste or inter-faith relationships especially, eloping is often the only option. For others, it’s often the only solution when they are caught by their parents having a relationship, or if the girl gets pregnant and can no longer hide her relationship. And for many others, marriage appears to be an attractive escape from an oppressive family and the tedium of household chores.

18 is considered the age of majority all over the world, where young people are given the freedom to make their own decisions – vote, get a driving license, get married.

In India, different laws and acts define a child at different levels according to their own objective.

Raising the age of marriage from 18 to 21 strengthens the hold that the State and natal families have over girls and strips away their agency, even above the age of 18. Young women and girls already tend to have the least amount of control over their own lives. Young people desperately wanted the freedom to make their own decisions and shake the hold that their families had over them.

The number of cases registered under the Prohibition of Child Marriage Act (PCMA), 2006. In 2016, only 645 cases were registered, 1,954 people were arrested, and only 70 people were convicted.

Currently, the Prohibition of Child Marriage Act (PCMA), 2006, is in force to prevent child marriages. However, the law is full of loopholes, making it ineffective in countering the menace.

When the existing law is not effective, simply focusing on age and punitive measures will not improve the situation of child marriage in India. Raising the age of marriage to 21 will increase the vulnerability and harm of young people – the very people it is meant to protect.

The effort to change the age of marriage for girls might have some demographic gains. With this change, we could see a decrease in Infant Mortality Rates (IMR) and Maternal Mortality Rates (MMR) in India. But we fear that if this change is put into place without addressing some of the core underlying issues and norms, or without addressing the prevailing mindset, we would be making the lives of girls even more difficult.

Increasing the legal age of marriage to 21 years will add to these existing hurdles for child marriage in India, young women’s access to reproductive and sexual healthcare. All these put SC-ST households, who have the least recourse to legal and other safeguards, at a greater risk. Any attempt to leapfrog through quick-fix and ill-conceived punitive measures will only considerably reverse these gains