COW’S IN INDIA – A LEGAL PERSPECTIVE

You are here:
Animal LawLegal ArticlesUncategorized

COW’S  IN INDIA – A LEGAL PERSPECTIVE

The conflict arose between economic policy and the culture invoking sentiments of the Hindus and the use of cattle for business purposes in agriculture and in industries. This issue had been considered and placed in directive principles of state policy in article 48 of the Indian constitution which was meant to guide the state for policymaking but could not be enforceable in a court of law. The majority of members in the constitutional assembly found it unsatisfactory. 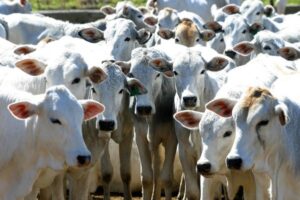 Cow protection is a serious issue in India. The cow is an important Hindu symbol of maternity and fertility. For those fearful that colonial policies were endangering traditional Hindu practices, and others who were struggling with increased competition for education, jobs, and scarce resources, the cow represented a comforting and benign figure, a guard against evil, and an illustration of good Hindu behavior. As such cow protection was a unifying issue for Hindus of all walks of life.

India is the second-largest exporter of buffalo meat, the fifth-largest producer, and the seventh-largest consumer in the world. Almost half of all beef produced is consumed domestically. There is no ban on importing canned beef.

The central government also seems keen on doubling the size of the Indian leather industry – the production, import, and export of cow leather have not been objected to by the saffron brigade.

Reasons not to ban

For a farmer, that is an economic disaster. Cows are expensive to maintain and once the income from milk dries up, keeping an unproductive cow is no longer viable. So, cattle are inevitably sold for slaughter. The farmer may even be vegetarian themselves, but it is economics that compels them to sell their cow.

Alternatively, certain findings were concluded by the constitution bench in the case of Qureshi v. State of Gujarat

The cattle population that is fit for breeding and work must be properly fed for maintaining the health and nourishment of the nation. The maintenance of useless cattle which cannot work or breed involves a wasteful drain on the nation’s cattle feed.

A total ban on the slaughter of cattle would bring a serious dislocation, though not a complete stoppage, of the business of a considerable section of the people who are by occupation Butchers, hide merchant and so on.

Such a ban will deprive a large section of the people of what may be their staple food or protein diet.

Opposition To Ban on Cattle Slaughter

Numerous ordinary citizens, butchers, gut merchants, and cattle dealers in India have challenged this ban by filing petitions in various courts across the nation on the ground that it violates their fundamental rights as under.

Article 19(1)(g) – Freedom to practice or carry on any profession, trade, business, or occupation.

Under this article, every citizen has the right to choose any employment or to take up any trade or calling, subject only to the limits as may be imposed by the state in the interest of public welfare.

Butchers, gut merchants, and cattle dealers have suffered a great number of losses after the ban on cattle slaughter came into effect even when the constitution has provided them with the right to carry on any trade or occupation of their calling.

LAWS RELATED TO THE PROTECTION OF COWS IN INDIA

On 26 October 2005, the Supreme Court of India, in a landmark judgment upheld the constitutional validity of anti-cow slaughter laws enacted by different state governments in India. 20 out of 28 states in India currently have various laws regulating the activities of slaughtered cows, prohibiting the slaughter or sale of cows.

Arunachal Pradesh, Assam, Goa, Kerala, Mizoram, Meghalaya, Manipur, Nagaland, Tripura, and West Bengal are the states where there are no restrictions on cow slaughter.

Article 48 is included as a “Directive Principle of State Policy”, meant to guide the Indian states in policy formation and its implementation, but could not be enforced in any court.

The purpose of Article 48 of the constitution is aimed at protecting Bos Indicus In view of the persistent demands requested from the related religions, for action to be taken to prevent cattle slaughtering, the government formulated Article 48 for the well-being of cattle and to take measures to secure the cattle wealth of India.

Article 48 was challenged in the SUPREME COURT by butchers, tanners, gut merchants, curers, and cattle dealers. The petitions were filed in accordance with fundamental rights as mandated in (Article 19(1)(g)) and religion (Article 25) which were violated by enforcing Article 48.

Prevention of Cruelty to Animals Act, 1960

– Cannot kill any animal in a cruel manner

– Empowers police officer not below the rank of sub-inspector or any person authorized by the state government to enter and search places, as well as seize animals to ensure they are not being treated with cruelty – Protects public servants who have acted in good faith or intended to act in good faith – Can only kill suffering animals in a humane manner or as per the prescribed method required by any religion or community – Provides for an Animal Welfare board

– Precautions must be taken before exporting animals for any purpose and a license for different appliances to be used for that purpose is to be issued.

PUNISHMENT AND NATURE OF OFFENCE

– Burden of proof on accused if found with the skin of cow, goat or its progeny

In states of West Bengal, Kerala, and North- Eastern states such as Arunachal Pradesh, Mizoram, Meghalaya, Nagaland, Tripura, and Sikkim has no state ban on beef. There are most of the states where cow slaughtering is declared illegal like, for example in Tamil Nadu, cow slaughtering is banned up to 3 years jail and Rs. 1000 fine but slaughtering of economically worthless animals is not allowed.

Similarly, in Telangana and Andhra Pradesh, offenders will face imprisonment of 6 months and a fine of Rs. 1000. In Gujarat slaughtering of cow, calf, bull, and bullock are banned and there is a punishment of Rs. 50,000 and 7 years of jail and, etc.

The above state law shows that No state law explicitly prohibits beef consumption. State laws regulating cattle slaughter are lacking in uniformity. The most stringent laws are in Delhi, Gujarat, Haryana, Himachal Pradesh, Jammu and Kashmir, Punjab, Rajasthan, and Uttar Pradesh and Uttarakhand, where cow slaughter and their offspring, including bulls and bullocks of all ages, are absolutely prohibited.

Some states prohibit absolute slaughtering of cattle in any manner but then also animals across the border are illegally slaughtered.

There should be a uniform law for preventing the slaughtering of animals which is not possible in India because of diverse populations, religious sentiments, and economic factors.

The Environment Ministry in May 2017 issued a notification titled ‘Prevention of Cruelty to Animals (Regulation of Livestock Markets) Rules, 2017’ which banned all types of cattle slaughter nationwide except in the state of Jammu and Kashmir. It includes all types of bovine animals like bulls, camels, etc

The basic purpose of the Rule is to ensure animal welfare on the cattle market and to provide adequate housing, feeding, feed processing, water supply, water troughs, ramps, sick animal enclosures, veterinary care, and proper drainage, etc. Two committees are set up to promote this, namely the District Animal Market Monitoring Committee for animal market registration and the Animal Market Committee for market management at the local authority level.

This ban is totally extraordinary in India where only 30% of the cattle which are slaughtered are used for consumption and the rest 70% is used for trading in industries. It is very difficult to imagine life without buttons, soap, toothpaste, paintbrushes, and surgical stitches. Also in most of the states cow slaughtering is banned in northern, western, and central India.

There was a huge protest countrywide. Like in Kerala people organized beef fest in different parts of the state to protest the center’s recent ban on beef which was organized by students and activists. The state legislative assembly passed a special resolution asking the center to remove the slaughters ban as it infringed the food eating habit rights of people. The protest erupted in Tamil Nadu against the center for banning cow slaughter across nationwide and the beef fest was organized in IIT Madras to protest for the same.