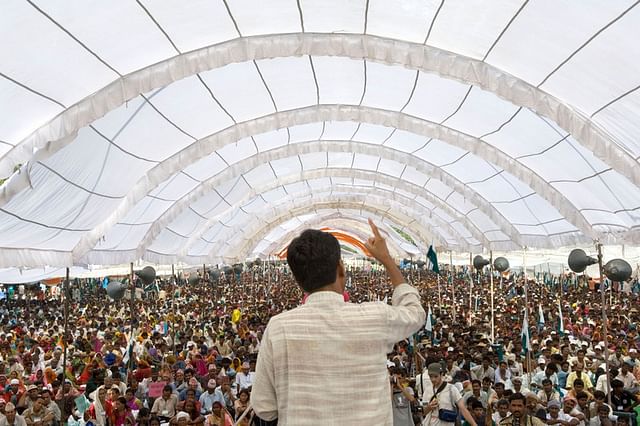 INTRODUCTION TO FREEDOM OF SPEECH & EXPRESSION

In India, freedom of speech and expression is granted by Article19(1)(a) of the Indian Constitution. It applies only to the citizens of India and not to foreign nationals.

Freedom of speech under Article 19(1)(a) includes

It is regarded as one of the most basic elements of a healthy democracy because it allows citizens to participate in the social and political process of a country very actively.

a) Sovereignty and Integrity of India

The amendment was made to guard the freedom of speech and expression against being used to attack the territorial integrity and sovereignty of the Union of India. Therefore it would not amount to an infringement if the Parliament by law restricts the right to free speech if it preaches secession of any part of India from the Union of India.

b) Security of State

The speech and expressions that encourage violent crimes are related to the security of the State.  “Security of State” means the absence of serious and aggravated forms of public disorder as distinguished from ordinary breaches of public safety or public order which may not involve any danger to the State itself.

Thus security of the state is endangered by crimes of violence intended to overthrow the Government. It would thus comprise internal and external aggression.

c) Friendly Relations With The Other States

Reasonable Restrictions may be imposed on the freedom of speech and expression in the interest of friendly relations with foreign states. It is a well-settled proposition of International law that the State is responsible for the acts committed by the persons within their jurisdiction.

The term public order signifies the absence of disorder in contradiction to national outbreaks, armed rebellion, etc affecting the security of the State.

This is yet another ground that restricts the freedom of speech and expression. Decency means the same as lack of obscenity. Obscenity or indecency is mentioned under section 292 – 296 of the Indian Penal Code

The term Contempt of Court is defined in Section 2 of the Contempt of Courts Act, 1971. The term contempt of court refers to both civil as well as criminal contempt. But judges do not have any general immunity from criticism of their judicial conduct, provided that it is made in good faith and is genuine criticism, and not any attempt to impair the administration of justice.

Defamation basically refers to the tarnishing or injuring the reputation of a person. A matter which is defamatory in nature exposes the affected person to hatred, ridicule, or contempt or causes him to be avoided. Such matter can be either in libel (writing, printing, or some other permanent medium) or slander (words spoken or imitated by gestures).

h) Incitement to an Offence

This ground too was added by the First Amendment to the Constitution in 1951. Freedom of speech does not confer the license to cause incitement to commit offenses. The law of sedition covered under section 124A of the Indian Penal Code is a good example of this.

PRESS AND FREEDOM OF SPEECH

Although it is not a problem, the media should express its views on certain topics. The problem arises only when the media becomes the judge, jury, and executioner instead of doing their jobs as providing information. This came to be known as the media trial. 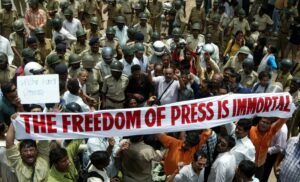 Media Trial by concept means the coverage of the person’s reputation by making a person guilty regardless of the verdict given by the law. In other words, it’s just the media trying so hard to be the Supreme Court of India in a nutshell and start making judgments regardless of the judiciary’s verdict.

The Jasleen Kaur case is an example of a media trial. A girl falsely accuses a person of sexual harassment on her Facebook post.

The media reached the verdict that the person is the pervert of Delhi without even listening to the guy’s story. When the court acquitted the latter because the girl hasn’t appeared in the proceedings. The credibility of the post on Facebook has been questioned, the damage was already done because of the girl’s action and the media’s role in it.

The freedom of speech in India has been a boon granted to us by the Constituent Assembly. However, the boon which had been granted to us is used so that it imposes a hindrance in the lives of the citizens.

The use of social media for the purpose of sending messages to the citizens must be under scrutiny. There could be a possibility of the freedom of speech being used for dangerous purposes.

The very essence of democratization lies in public discussions which can help the government mend its way of functioning. The citizens can have the feeling that the State is indeed a welfare state and is working for their welfare.

Therefore a careful and knowledgeable use of the freedom to speak will help create a better society and the dream of a Welfare State will be realized.

Media is the 4th pillar of democracy, but the media trials have proved it otherwise for some people because of their recent atrocities. The media is supposed to be the provider of information in a democracy and not the court itself. Because of this, the judiciary must act as a deterrent against the media trial so that they won’t misuse their influence, power, and privilege to destroy someone’s life.

The freedom of speech and expression should be protected by both the judiciary and the constitution so that every citizen shall have the right to express their opinions regarding certain issues in the country without being called out names by anyone including the media.