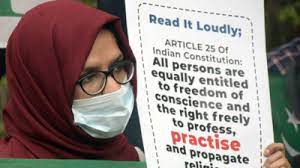 Part III of the Constitution of India provides for the Fundamental right. Freedom of Religion is part of the Indian Constitution. Whenever the conflict arises between the Article 25 and any other Fundamental Right, it the latter which always prevails. Freedom to Religion includes faith in religion as well as right to propagate and practice. The Hon’ble Apex court has held that religious beliefs which are guaranteed under the Article 25 are protected.If we examine the prevalent circumstances in Karnataka, Hijab is the core of the Islamic religion. The government prescribing the uniform civil law for the educational institutions is violation of the Fundamental Right.

After 6  students banned from entering a college in Karnataka’s Udupi district for wearing a hijab last month, the row over whether educational institutions can impose a strict dress code that could interfere with rights of students has spilled to other colleges in the state. The issue throws up legal questions on reading the freedom of religion and whether the right to wear a hijab is constitutionally protected.

VIOLATION OF FREEDOM OF RELIGION

Right to wear hijab is an essential religious practice which cannot be restricted by the State.  Wearing of hijab is a facet of freedom of speech and expression under Article 19(1)(a) of the Constitution of India.

In the case of Amnah Bint Basheer v. Central Board of Secondary Education, the Kerala High Court held that wearing a headscarf/hijab/burqa constitutes an essential practice in Islam. In spite of this observation, a CBSE imposed a dress code for an examination.  Interestingly, the court noted that even if a practice is essential to a religion and protected by Article 25, restrictions on the grounds of public order, morality, and health can be imposed by the State. It then made an attempt to balance the right of the individual with the right of the institution.

Article 25 of the constitution is on the Freedom of conscience and free profession, practice and propagation of religion.

However, not all aspects of one’s religion is protected under the article. If one seeks to claim the protection of Article 25 for a particular religious practice, they would have to demonstrate that such a practice constitutes an essential part of a religion which is primarily to be ascertained with reference to the doctrines of that religion itself.

It is imperative to state that the right to privacy has been held as the fundamental right by the Supreme Court. The right to wear clothes of one’s choice is also part and parcel of the said right. Justice Chandrachud writing for three other judges, stated:

From this it is clear that expressions of faith and modes of dress fall within the purview of right to privacy. This argument appears to be on stronger footing than the ‘essential religious practice’ test under Article 25. If the state or a private entity has to limit this right, it has to fulfil the three pronged test set out in Puttaswamy.

Proportionality is an important facet of the guarantee against arbitrary state action. It ensures that the nature of the encroachment on the right is not disproportionate to the purpose of the law. For instance, the state or private school may for a particular reasonable purpose, such as identification or to ensure cheating does not happen in examination, ask Muslim women to remove the hijab for a short period of time, just to fulfil that particular purpose. This is the standard the state must meet, in order to limit the right to hijab.

While calling for the re-opening of the educational institutions, which were ordered to be shut by the State Government in the wake of agitations over hijab ban, the Court ordered :

“Pending consideration of all these petitions, we restrain all the students regardless of their religion or faith from wearing saffron shawls (Bhagwa) , and connected matters scarfs, hijab, religious flags or the like within the classroom”.
There clearly is the suspension of Fundamental Rights prescribed in the interim order of the High Court.

The Principles for granting interim order have been overlooked while passing the order. There is no BALANCE OF CONVENIENCE. The court should compare the hardship caused to the petitioner in case of refusal to interim relief.  And the hardship caused to the respondent if relief is granted. In the present case, the court has not weighed the parameters. At the fag end of the academic year, the petitioners are denied the educational rights.