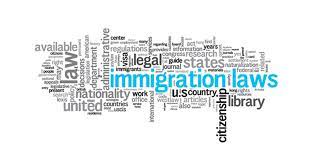 Immigration law deals with national statutes, regulations and legal precedents governing immigration into and deportation from a country.

As per Merriam Webster dictionary, emigration refers to departure from a place of abode, natural home, or country for life or residence elsewhere.

The primary intention of immigrants is to settle down in a foreign country as its permanent resident due to political, economic, religious or other related issues. However, this is a guided procedure and regulated by an elaborate legal framework.  This framework is specific to individual countries. Object is to   maintain law & order and not compromise its national interests.

What are the immigration laws in general?

Immigration laws refer to rules and regulations which are specifically aimed at governing immigration in a country. For foreign citizens, these laws are linked with country-specific citizenship laws. Besides domestic laws, international laws also connect to the matters relating to immigration.  United Nations International Covenant on Civil and Political Rights (UN-ICCPR) is  an important aspect  in this regard. The apex international body which directs migration problems is the International Organization for Migration. This organization was established in the year 1951. It  was particularly associated with European Migration, with the aim of helping stranded or victimized after the culmination of the Second World War. However, a basic difference that exists between an immigrant and migrant is that while the former would have been a migrant before. The later might not necessarily become an immigrant.

India is a vibrant country which is home to diverse cultures, beliefs and communities. It is thus an attractive place for immigrants from across the world. The greatest challenge for consideration of immigrants to any host country is the acquisition of citizenship.  Besides other fundamental rights and freedom granted to its citizens.

As far as the subcontinent is concerned, the primary source of legal structure pertaining to immigration is the Constitution of India:

Other Immigration laws in India

Three other laws that primarily deal with immigration in India are briefly discussed below:

How to become an immigration lawyer in India?

All these situations  speak  highly for the need and importance of immigration lawyers in the country.  Those who are skilled and experienced to cater to the  needs of different clients and their demands. Immigration policies, rules and regulations are one of the first laws reviewed or altered by States in cases of any international aggression or emergencies. Thus comes into play the role of immigration lawyers who help such people pursue their aims.