INDIA’S FIGHT OVER OXYGEN AND RIGHT TO LIVE

Amid the coronavirus pandemic, India is dealing with shortages on all fronts, be it oxygen, medicines, vaccines, or even doctors and nurses. The capacity is limited and the demand is overwhelming. As a result, there is chaos and what is being called a system collapse.

Medical Oxygen is regulated both by the Central Drugs Standard Control Organization (CDSCO) and the Ministry of Industry and Commerce, which PESO comes under.

Earlier, no governments were actively involved or monitored the supply of medical oxygen to hospitals. Hospitals contracted suppliers directly, who would then deliver it every two to four days or whenever stocks needed to be replenished.

However, since the nationwide lockdown was first announced in March 2020, the Empowered Group 2 — one among the several other empowered groups — was formed under the Ministry of Home Affairs to monitor and ensure the availability of essential medical supplies, including oxygen. This is why states must appeal to the central government for allocations. 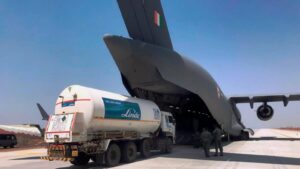 Is India out of oxygen?

Surprisingly, the answer to this is ‘no’.

India is a significant producer of oxygen as it produces more than 7,000 metric tonnes of oxygen per day. However, in recent weeks the demand has shot up tremendously.

According to one estimate, India’s coronavirus patients need more than 13 million cubic meters of oxygen. This is among the highest in the world.

So, on paper, India can technically meet this demand and can even have a few metric tons to spare. However, in reality, this oxygen is not reaching patients and hospitals because India doesn’t have enough tankers to supply it.

Therefore, several countries are stepping in to help and are sending oxygen tankers to India. This week, 14 tankers arrived from three countries.

India already possesses more than 1,200 oxygen tankers. According to reports, they have a capacity of more than 16,000 metric tons of liquid oxygen but it takes up to a week of turnaround time. It takes one week for officials to pick up oxygen from one source and deliver it to another.

The biggest bottleneck is cryogenic containers which are used to transport oxygen in liquid form.

The biggest challenge was transporting oxygen from the eastern and southern states, where demand isn’t growing as quickly as the northern and western states, which are struggling for supplies.

In Delhi, which has been allocated 490 MT of oxygen, the state was rationing its supply by allocating each hospital with a fixed amount.

Despite this, the city has continued to see SOS calls from hospitals because these allocations have been inadequate. The Delhi government, which had appealed to the central government for a larger supply, says at least 700 MT of oxygen is required to meet current medical needs.

According to a government statement, the daily production capacity (including for industry use) of oxygen currently is 7,127 MT while the demand is 6,600 MT.

This is several times higher than the demand for medical oxygen in pre-Covid times, which was around 700 MT per day.

Among the biggest manufacturers of oxygen are Inox Air Products — which manufactures 60 percent of the country’s total oxygen supply — along with Linde and Goyal MG Gases. The country also plans on importing 50,000 MT of oxygen.

WHAT IS INDIA DOING TO SOLVE THE CRISIS?

The federal government has activated the Indian railways to move multiple tankers from refilling plants to where it is most needed.

Working with industrial gas major Linde India and others, the government is also using the Air Force’s cargo planes to fly empty tankers to production hubs. Refilled oxygen tankers will then move back by road.

The government has issued orders to convert argon and nitrogen tankers into oxygen ones.

But as some experts predict a trebling of daily infections in a few weeks, India will have to dramatically ramp up both oxygen production and distribution systems. 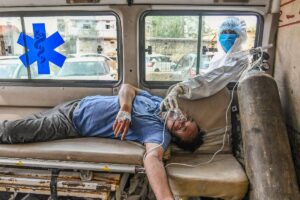 WHAT DOES ARTICLE 21 OF THE CONSTITUTION SAY?

Article 21 of the Constitution says –

“No person shall be deprived of his life or personal liberty except according to procedure established by law.”

These eighteen words guarantee us the right to live, meaning no one can injure us and get away with it; meaning we cannot be illegally deprived of our personal liberty. This means that a person’s life and personal liberty can only be disputed if that person has committed a crime.

It is interesting to note that the founding fathers have perhaps never visualized that a short provision that they were embodying in the Constitution has so much potentiality.

In the background of the aforesaid, this article seeks to analyze the elements of Article 21 in the light of the current situation with an extended view of the right to life, right to health, right to education, right to food, and right to privacy.

With the inception of the lockdown, the fundamental rights of citizens have been entailed.

Despite several thoughtful initiatives taken by the state governments, the enforcement of the same has been a fight.

Hereinafter are the aspects of Article 21 running parallel to the present pandemic:

Taking into account the situation of Covid-19, the Ministry of Home Affairs issued directions to the state governments and authorities to ensure that all the employers make payment of wages to their workers on the due date and the said wages shall under no circumstances be deduced.

Further, the wages must be made for the period the establishment/industry/shops are under closure during the lockdown. It is pertinent to mention that the Hon’ble Supreme Court in Covid-19: Impact on Right to Life and Personal Liberty Peoples Union for Democratic Rights v. Union of India held that non-payment of minimum wages to the workers is a denial of their right to live with basic human dignity and violation of Article 21 of the Constitution.

As mentioned earlier that the enforcement of initiatives is a fight because certain institutions in the informal sector are breaching the directions issued by the government. From deducting wages to dismissing a percentage of employees to further delaying payment of wages, a few sectors in the economy are practicing these violations.

In the present circumstances, the health and welfare of our nation are at stake which brings forth the Fundamental Right of ‘Right to Health’ in the spotlight. The ones infected by Covid-19 as well as the ones working on the medical front are all equally entitled under the right to health and medical care.

However, the government suffers from inadequacies of the medical apparatus required to contain a pandemic like this. From the shortage of testing kits necessary to examine the patients with Covid-19 to the unavailability of adequate Personal Protective Equipment essential for the wellbeing of the healthcare workers, the state is unable to provide for both.

It is noteworthy to bring into consideration the landmark judgment of Consumer Education & Research Centre (CERC) and others v. Union of India and others(4) wherein the Hon’ble Supreme Court held that “the compelling necessity to work in an industry exposed to health hazards due to indigence to bread-winning for himself and his dependents should not be at the cost of health and vigor of the workman”. Thereby, bestowing Personal Protective Equipment and other necessary safety supplies to the healthcare sector is the obligation of the state governments, ignoring which will be a grave contravention of the Fundamental Rights of the healthcare workers.

The State Government is under an obligation to endeavor to provide educational facilities at all levels and under all circumstances. However, considering the pandemic situation, the state governments have suspended the educational institutions.

It is well known that a large chunk of the Indian population cannot pay for the basic technology which is currently being utilized to provide for the lost school hours. It goes unsaid that this deprivation is denying our country’s youth from gaining their rightful education.

Further, the mid-day meal program acts as a knight in shining armor for the government schools, but unfortunately, it has taken a back seat due to Covid-19. From providing necessary nourishments to covering for the cost of a child’s meal, the mid-day meal initiative deserves an alternative in the current scenario.

Covid-19: Impact on Right to Life and Personal Liberty

Reflecting upon the element of ‘Right to Food’, the state governments have time and again assured constant availability of food stock to ration shops. However, these measures have turned impractical in the present-day situation as reports show that in various states many poor people struggle to get food, and the migrant residents who do not possess a BPL card are considered unsuitable to avail food grains from ration shops.

To contain the spread of Covid-19, there have been several instances wherein the state governments have released the personal data of people who have been quarantined. This data pertains to the names, passport numbers, residential addresses, and phone numbers. Every citizen has the rightful authority over their personal data. For the protection of the ‘Right to Privacy’, such data should not be released without the consent of its lawful possessor.

Further, the launch of the Aarogya Setu App is a significant development by the government in these trying times. The app obtains data from the user about their health and further utilizes it to keep a record of their movement and health. The data obtained by the app thereby helps the community in being vigilant and informed about their surroundings thereby alerting its user if they have come in contact with a Covid-19 positive patient.

To prevent misuse of this intricate data, state governments should ensure systematic use of records and must take all necessary measures to protect the same.