LEGALITY OF MARITAL RAPE IN INDIA 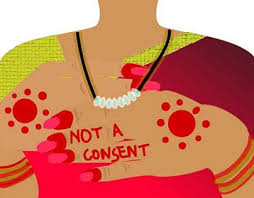 “Her friends used to tell her it wasn’t rape if the man was your husband. She didn’t say anything, but inside she seethed; she wanted to take a knife to their faces.” – F. H. Batacan

The Delhi High Court is in process of hearing a challenge to the constitutional validity of the ‘marital rape immunity’ provided for in the Indian Penal Code. The case has put the spotlight on crucial issues concerning consent and  the extent of state control on female sexual autonomy.

Rape is an unlawful sex without consent because of physical drive or due to deceitful demonstration of accused. . In India rape by a stranger is a penal offense under section 375 and 376 of IPC. Shockingly, it unequivocally avoids marital rape from ambit of conviction. Marital rape is sex by spouse with his better half without her consent or by compulsion or danger.

The heart of the debate is Exception 2 to Section 375 IPC, which states that any sexual act performed by a man on his own wife is not rape as long as the wife is not a minor.

This exception exists in Section 375, which otherwise defines various acts that, if done against a woman’s consent, by force, fraud, or coercion, or to a woman incapable of giving consent, are defined as rape.

HISTORY OF THE CASE

The NGO,  RIT Foundation first petitioned the Delhi High Court in 2015, challenging the legality of the “marriage exception” under the section 376.

Following the Supreme Court’s decision in 2017 that the marriage exception does not apply if the wife is under the age of 18, petitions were also filed by the All India Democratic Women’s Association (AIDWA) as well as three individual petitioners, one of whom was  a victim of domestic and sexual violence.

Currently, the issue is  being heard by a bench of Justices Rajiv Shakdher and C Harishankar. Arguments have been heard from the petitioner NGOs as well as the Men’s Welfare Trust, a “men’s rights” organization that has opposed the petition.

Apart from the question of “social disharmony” and “damage to marriage and family systems” raised by the government in its 2016 affidavit, the court is also looking into the intricate legal issues that would arise in this case.

The most important question before the court is definition of  “consent” ,especially when there is “implied consent” and “expectation of conjugal sexual relationship” in a marriage. The judges also noted that there is a distinction between the “right to have sex” and the “reasonable expectation of sex,” but the definition of consent within a marital relationship shall be considered.

Violation of Article 14 of the Indian Constitution

Article 14 of the Indian Constitution ensures that “[t]he State shall not deny to any person equality before the law or the equal protection of the laws within the territory of India.” Although the Constitution guarantees equality to all, Indian criminal law discriminates against female victims who have been raped by their own husbands.

At the time the IPC was drafted in the 1860s, a married woman was not considered as an independent legal entity. Rather, she was considered to be the chattel of her husband. She did not possess many of the rights.

Exception 2 violates the right to equality enshrined in Article 14 . It discriminates against married women by denying them equal protection from rape and sexual harassment. The exception fabricates two classes of women based on their marital status. It immunizes actions perpetrated by men against their wives. In doing so, the Exception makes possible the victimization of married women for no reason other than their marital status while protecting unmarried women from those same acts.

OPINION OF THE COURT SO FAR

A bench of justices Rajiv Shakdher and Hari Shankar,, said the argument by the NGO, Men’s Welfare Trust, is “vague” as the bench is examining the legal aspect of the problem and not the social or psychological impact.

The court said that it can only “look into” the factors that have gone into the framing of a particular legislation, but ultimately the provision has to be tested on the anvil of the Constitution.

Earlier during the hearing, advocate J Sai Deepak, appearing for the NGO, said that the issue of criminalizing marital rape should be kept out of the domain of the courts for the purposes of judicial legislation because the court is not in a position to accommodate or at least share multiple points of view for multiple reasons.

“In any case, this is a matter which requires people who undertake gender studies to contribute to it,” he said.

Justice Shakdher said, “How many years has this provision been there in the statute? There has to be a perspective and a sense of proportion. What do people do when they say that they are suffering, where do they go? That is in every legislation no? You can’t shut your doors no.” “If the argument has to be accepted, then we must fold our hands and say that this is the job of the legislature….we will do nothing,” the judge added.

It certainly is a wrongdoing against ladies . Women who are raped by their husbands are prone to danger of various attacks and frequently endure long haul physical issues.  Marital rape is significantly more horrendous for a lady since she has to endure the atrocities and live with her aggressor in every aspect. There is obviously a dire requirement for criminalization of the offense of marital rape.