LIVE IN RELATIONSHIPS IN INDIA

Live-in relationships in India also called ‘cohabitation’ is an alternative for marriage, by which two-person of the same or different sex can live together without any legal rights against each other. The proverb “marriage is happening in heaven” gives a very deep meaning to marriage. Marriage is one of the religious rituals by which two-person of different sex gets committed for lifelong. Marriage can reinforce the family system and is very well accepted by society. Although married couples do encounter rough waters, there is an effort made by them and their family and friends to get past the same. However, this is not the case in alive in which can be broken easily as there is no socio-legal backing to it.

Marriage is governed by a separate set of laws in all countries which safeguards the interests of both parties who enter into the union. Live-in relationships on the other hand have received due recognition in a few countries such as France and the Philippines. In India, presently there is no law defining the maxims of a live-in relationship. Live-in relationships are now becoming an acceptable option by the upper classes in Indian society, yet the middle class remains under societal pressure and the same cannot be seen in this strata of society.

Merits of live-in relationships are that it does not require any formal commitment from the partner. But live-in relations although seem a good alternative has their drawbacks of forcing life into an unstable phase. As there are no legal rights so life is filled with fear of separation.

(a) “The couple must hold themselves out to society as being akin to spouses.

(b) They must be of legal age to marry.

(c) They must be otherwise qualified to enter into a legal marriage, including being unmarried.

(d) They must have voluntarily cohabited and held themselves out to the world as being akin to spouses for a significant period of time, and besides, the parties must have lived together in a ‘shared household’ as defined in Section 2(f) of the Protection of Women from Domestic Violence Act, 2005. Merely spending weekends together or a one-night stand would not make it a ‘domestic relationship’.”

The right to maintenance of a woman in a live-in relationship is decided by the court to be under the Protection of Women from Domestic Violence Act, 2005, and will be given based on the individual facts of the case.

Though the common man is still skeptical in accepting this kind of relationship, the Protection of Women from Domestic Violence Act, 2005, provides protection and maintenance to a woman thereby granting the right of alimony to an aggrieved live-in partner.

There is no legal barrier in live-in relationships between an unmarried girl and a married man. But both persons should not be minors and should be capable of giving consent and understand the circumstances in which are they living. Living in a relationship is not considered to be marriage. A marriage with the girl/man is one aspect of marriage act and living with her/him is another concept. A live-in relationship cannot be called a second marriage of the man. But there is a condition to this is that the unmarried girl should know about the marriage of his partner before entering into the relationship. If the marriage of the adult male is not disclosed to the girl then the girl has the liberty and right to file the criminal proceedings against the male partner for concealing facts. Moreover, the girl can file a maintenance petition against the man with whom she is in a live-in relationship. If by their relationship a child is born he can claim the maintenance and property in equal to the child born from the legal wedding. 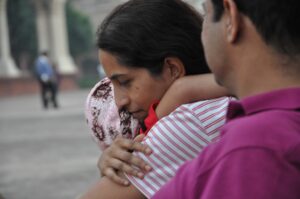 RIGHTS OF THE CHILD BORN OUT OF A LIVE- IN RELATIONSHIP

For a child born out of a live-in relationship, four rights are very important:

The Supreme Court had said, “If a man and woman are living under the same roof and cohabiting for some years, there will be a presumption under Section 114 of the Evidence Act that they live as husband and wife and the children born to them will not be illegitimate.”

Further, the court interpreted the status and legislation to an extent that it shows conformity from Article 39(f) of the Constitution of India which sets out the obligation of the State to give the children adequate opportunity so that they develop adequately and further safeguard their interest.

The denial of providing maintenance to a child born out of a live-in relationship can be challenged under Article 32 of the Constitution of India amounting to a violation of the fundamental rights which guarantees under Article 21 which provides for the Right to Life and Personal Liberty.

Children born out of such relationships will have the right to whatever becomes of the property of their parents whether self-acquired or ancestral in light of the laws of equity and lack of clarity for the concerned sections of the specified statutes.

Section 16 and the subsequent amendment eliminating the distinction between children born out of valid/void/voidable marriages is to bring about social reforms and conferment of the social status of legitimacy on innocent children which would actually be undermined by imposing restrictions on rights guaranteed under the said section.

Section 6(b) of the same act seems to deal with live-in relationships in an indirect manner as it grants the custodial rights to the mother in case of children born out of illegitimate relations.

Consequently, if we make a positive interpretation of the law, it can be concluded that in the case of a break-up between the live-in partner by being the natural guardian of a legitimate child, the father will acquire the custodial rights of the concerned child.

A child born in a live-in-relationship would be treated as a child born to a married couple to surrender a child for adoption under the Juvenile Justice (JJ) Act.

LAWS RELATED TO LIVE IN RELATIONSHIP

Supreme Court requested Parliament to enact new legislation based on certain guidelines given by it so that the victims can be given protection from any societal wrong caused by such relationships.

Following are the guidelines are given by Supreme Court:

(1) Duration of Period of Relationship

Section 2(f) of the Domestic Violence (DV) Act has used the expression at any point of time’, which means a reasonable period of time to maintain and continue a relationship which may vary from case to case, depending upon the fact situation.

The expression has been defined under Section 2(s) of the DV Act and, hence, needs no further elaboration.

(3) Pooling of Resources and Financial Arrangements

Supporting each other, or any one of them, financially, sharing bank accounts, acquiring immovable properties in joint names or in the name of the woman, long-term business investments, shares in separate and joint names, to have a long-standing relationship, maybe a guiding factor.

Entrusting the responsibility, especially on the woman to run the home, do the household activities like cleaning, cooking, maintaining or up keeping the house, etc. is an indication of a relationship like marriage.

A marriage-like relationship refers to a sexual relationship, not just for pleasure, but for an emotional and intimate relationship, for procreation of children, to give emotional support, companionship, and also material affection, caring, etc.

Holding out to the public and socializing with friends, relations, and others, as if they are husband and wife is a strong circumstance to hold the relationship is like marriage.

(8) Intention and Conduct of the Parties

The common intention of parties as to what their relationship is to be and to involve, and as to their respective roles and responsibilities, primarily determines the nature of that relationship.”

In a landmark judgment on 8-4-2015 by the seat comprising of Justice M.Y. Eqbal and Justice Amitava Roy, the Supreme Court decided out that couples living in a live-in relationship will be presumed legally married. The Bench also added that the woman in the relationship would be eligible to inherit the property after the death of her partner.

Allahabad High Court stated that the right to stay in a live-in relationship is covered under Article 21 – Right to life and personal liberty. The court stated that a couple in a relationship has the liberty to live together and no person has the right to interfere in their peaceful living. In case of any disturbance, the Police authorities should be approached for immediate protection.

Although the Supreme Court of India has granted the legal status to Live-in Relationship, what happens if one partner decides to walk out. Could the other partner be left homeless? Will the children born into a live-in relationship be recognized by the law? Will it empower women with the Right to Inheritance, Right to maintenance, and Right to demand Alimony? Will the law give the same standing status to the live-in relationship as that of Marriage?

It should not be denied that our culture does need a legislature to regulate relationships that are likely to grow in number with changes in the ideology of people. The right time has come that efforts should be made to enact a law having clear provisions concerning the time span required to give status to the relationship, registration, and rights of parties and children born out of it. Laws should be made by the parliament, which should keep a check on the practice of evading bondage.