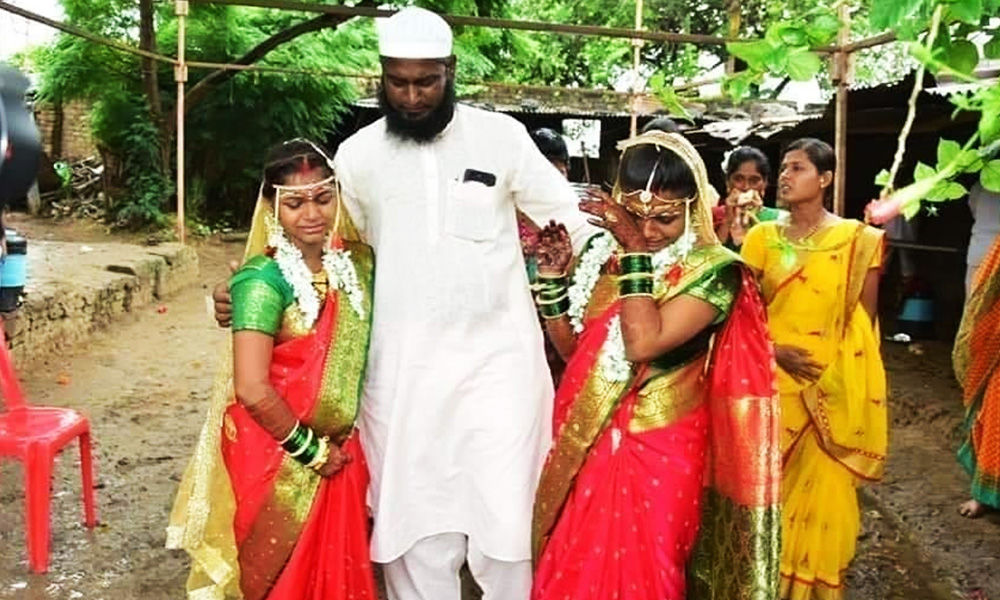 The Uttar Pradesh Prohibition of Unlawful Conversion of Religion Ordinance, 2020, which came into force on 27th November 2020, applies to everyone belonging to any religion. It seek to regulate religious conversions and Prohibition of Unlawful Conversion (including through marriages). Provides for the regulation of conversion through prescribed declaration.

Before we begin to discuss about this controversial ordinance let us just have a look about Kamal Rukh Khan, wife of late music composer, Wajid Khan has to say about her experience with forced conversion after her inter-caste marriage with Wajid which she shared via an Instagram post on the very day this ordinance was notified.

MY FIRST HAND ACCOUNT OF LIFE IN AN INTERCASTE MARRIAGE 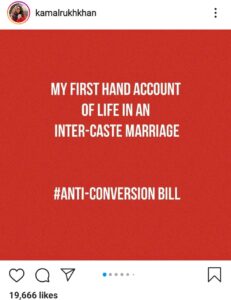 “My simple parsi upbringing was very democratic in its value system. Independence of thought was encouraged and healthy debates were the norm. Education on all levels was encouraged. However, post marriage, this same independence, education and democratic value system was the biggest problem for my husband’s family. An educated, thinking, independent woman with an opinion was just not acceptable. And resisting the pressures of conversion was sacrilege. I have always respected, participated and celebrated all faiths. But my resistance to convert to Islam drastically widened the divide between me and my husband, making it toxic enough to destroy our relationship as husband and wife, and his ability to be a present father to our kids.

‘I WAS DEVASTATED, FELT BETRAYED’

“My dignity and self respect did not permit me to bend backwards for him and his family, by converting to Islam. Conversion was not a value system I believed in personally. It was also not the example of a deep set rotten patriarchy that I wanted to set for my beautifully evolved children- my 16 year old daughter Arshi and my 9 year old son Hrehaan.

I fought this terrible way of thinking tooth and nail throughout my marriage. The result- being outcast from my husband’s family, scare tactics to make me convert included taking me to court seeking divorce. I was devastated, felt betrayed and was emotionally drained, but my children and I held on.

“Wajid was a super talented musician and composer who devoted his life to making melodies. My children and I miss him dearly and we wish he had dedicated more time to us as a family, devoid of religious prejudices, the way he did while creating his melodies. We never got to be a family due to his and his family’s religious fanaticism.

Today post his untimely death, the harassment from his family continues. I stand fighting for the rights and inheritance of my children which have been usurped by them. All this because of their hatred against me for not converting to Islam. Such deep rooted hatred that even death of a loved one could not move.

“I truly wish this anti- conversion law is nationalized, reducing the struggle for women like me who are fighting the toxicity of religion in inter caste marriages. We are bad mouthed, and labelled as being manipulative and greedy for standing our ground.

Religion should be a cause for celebration of differences not separation of families. This debate regarding the anti conversion bill should also delve deeper into the patriarchal mindset – it is mostly always the women who are made to forcibly convert. The conversion campaign has to be recognized for what it is – spreading hatred against different religious ideologies, separating wives from husbands and children from their fathers. All religions are the path to the divine. Live and let live should be the only religion we all practice.”

The Uttar Pradesh Prohibition of Unlawful Conversion of Religion Ordinance, 2020

Even though this heart-wrenching story will hold us here for a while, still we should move ahead and try to understand this Ordinance.

This ordinance which was recommended by the Uttar Pradesh Law commission’s 8th report on Freedom of Religion, provides for prohibition of “unlawful conversion” from one religion to another, only if such conversion has been achieved by; misrepresentation, force, undue influence, coercion, allurement or by any fraudulent means or by marriage and for matters connected or incidental thereto.

For the purpose of this Prohibition of unlawful conversion ordinance;

Allurement means: offer of any temptation in the form of gift, gratification, easy money, or material benefit; either in cash or kind of employment, free education in reputed school run by any religious body or better lifestyle, divine displeasure or otherwise.

Coercion means: compelling an individual to act against his/her will by the use of psychological pressure for physical force causing bodily injury or threat thereof.

Conversion: means renouncing one’s own religion and adopting another religion.

Force includes: a show of force or a threat of injury of any kind of the person converted or sought to be converted or to any other person or property.

Undue influence means: the in conscientious by one person over another in order to persuade the other to attend accordance with the will of the person exercising such influence

Unlawful Conversion means: any conversion not in accordance with the law of land.

Further, this Ordinance allow for police complaints, against unlawful religious conversions, to be registered by:

(i) the victim of such conversion,

(ii) his/her parents or siblings, or

(iii) any other person related to them by blood, and marriage or adoption.

A marriage is liable to be declared null and void, if:

(i) it was done for the sole purpose of unlawful conversion, or vice-versa, and

(ii) the religious conversion was not done as per the procedure specified in the Ordinance.

Repeat offences will attract punishment specified for the respective offence every time the offence under this ordinance is committed. Also, all offences are cognizable and non-bailable.

Additionally, the accused will be liable to pay compensation of up to five lakh rupees to the victim of conversion.

The most interesting part of Uttar Pradesh Prohibition of Unlawful Conversion of Religion Ordinance, 2020 is the Section 8, which provides for Lawful conversions. The section lays down the procedure for someone who desires to convert his/ her religion. The individuals seeking to undergo conversion are required to give advance notice of 60 days to the District Magistrate and the Religious convertors (the one who will perform the conversion ceremony ) are required to notify one month in advance to the District Magistrate. Upon receiving the declarations, the DM is further required to conduct a police inquiry into the intention, purpose, and cause of the proposed conversion.

The Ordinances also prescribes varying punishments for violation of any procedure prescribed under it.

Who shall be Punished ?

The burden of proof as to whether a religious conversion was not effected through misrepresentation, coercion, fraudulent means, lies on the person who has caused the conversion and where such conversion has been facilitated by any person then the onus of proof lies on such other person.

After going through the Uttar Pradesh Prohibition of Unlawful Conversion of Religion Ordinance, 2020, one just fails to understand what makes people to think of it as against religious freedom.

The Fundamental Right to Freedom of Religion guaranteed to every Indian citizen under Article 25 of The Constitution of India , in unequivocal terms states that all persons are equally entitled to freedom of conscience and have the right to freely profess, practice and propagate any religion.

In fact this ordinance only supports the Right to Freedom of Religion, in the ways that it not only prohibits forced, fraudulent, coercive and unlawful conversions but also allows and provides way for willful conversions.

It is more of a preventative measures which protects the Right to religious freedom. Also, it must be mentioned that the societal setup of the nation is such that it is mostly the women who suffers if she chooses to undergo inter-religion marriage, just as we have seen the case of Kamal Rukh Khan.

It is the right of every women to choose a life partner for herself, but her affection towards somebody should not force her to quit her own religion and faith. It should be her sole discretion to profess either her or her husbands religion and not an obligation.

The Uttar Pradesh Prohibition of Unlawful Conversion of Religion Ordinance, 2020 will uproot this rotten patriarchal setup and will help all the women who are made to convert forcibly.