The Doctrine of Basic Structure as Opined in Kesavananda Bharti Case 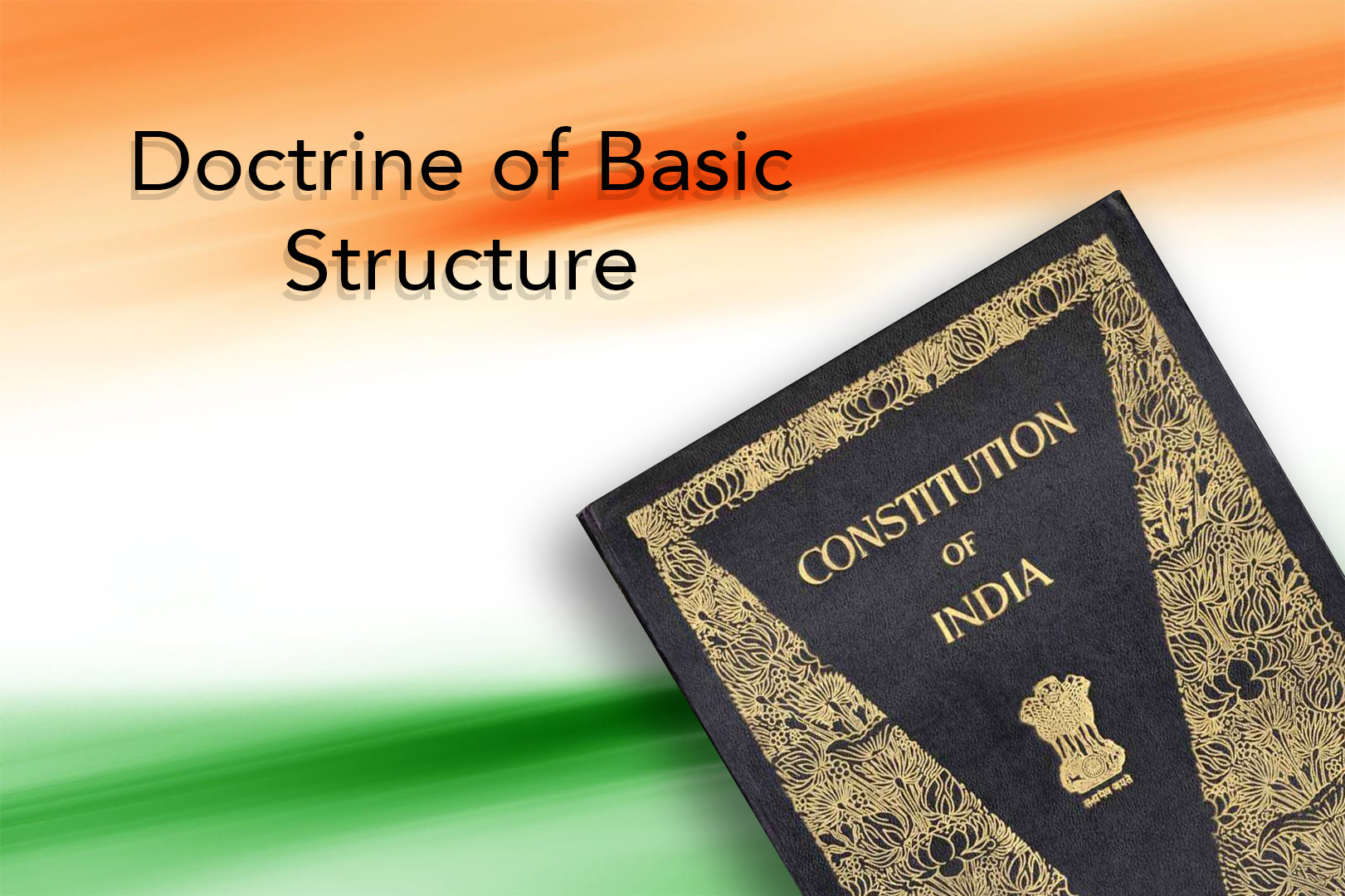 The Heart and Soul of Democratic India are its  Constitution. According to the
Constitution, Parliament, and the state legislatures in India have the power to make laws
within their respective jurisdictions. This power is not absolute in nature. The
Constitution vests in the judiciary, the power to adjudicate upon the constitutional
validity of all laws.

Article 368 of the Constitution gives the impression that Parliament&#39;s amending powers
are absolute and encompass all parts of the document. But the Supreme Court has
acted as a brake to the legislative enthusiasm of Parliament ever since independence.

With the intention of preserving the original ideals envisioned by the constitution-
makers, the apex court pronounced that Parliament could not distort, damage, or alter
the “Basic Features” of the Constitution under the pretext of amending it.

The phrase “basic structure” itself cannot be found in the Constitution. The Supreme
The court recognized this concept for the first time in the historic Kesavananda Bharati case
in 1973. Ever since the Supreme Court has been the interpreter of the Constitution and
the arbiter of all amendments made by Parliament.

Before Kesavananda Bharti- The Background

After independence, several laws were enacted with the aim of reforming land
ownership and tenancy structures. Parliament placed these laws in the Ninth Schedule
of the Constitution through the First and Fourth amendments (1951 and 1952
respectively), thereby effectively removing them from the scope of judicial review.

Property owners challenged the constitutional amendments which placed land reforms
laws in the Ninth Schedule before the Supreme Court, saying that they violated Article
13 (2) of the Constitution.

In Sankari Prasad Singh Deo v. Union of India (1952) and Sajjan Singh v. Rajasthan
(1955), the Supreme Court rejected both arguments and upheld the power of
Parliament to amend any part of the Constitution including that which affects the
fundamental rights of citizens.

Significantly though, two dissenting judges in Sajjan Singh v. Rajasthan case raised
doubts whether the fundamental rights of citizens could become a plaything of the
the majority party in Parliament.

In 1967 an eleven-judge bench of the Supreme Court in the Golaknath v. State of
Punjab case delivering its 6:5 majority judgment put forth the curious position that
Article 368, contained provisions related to the amendment of the Constitution, merely
laid down the amending procedure. Article 368 did not confer upon Parliament the
power to amend the Constitution. The amending power (constituent power) of
Parliament arose from other provisions contained in the Constitution (Articles 245, 246,
248) which gave it the power to make laws (plenary legislative power).

Thus, the apex court held that the amending power and legislative powers of Parliament were
essentially the same. Therefore, any amendment of the Constitution must be deemed
law as understood in Article 13 (2).

Article 13, according to the majority view, expressed this limitation on the powers of
Parliament. Parliament could not modify, restrict or impair fundamental freedoms due to
this very scheme of the Constitution and the nature of the freedoms granted under it.

The judges stated that the fundamental rights were so sacrosanct and transcendental in
importance that they could not be restricted even if such a move were to receive
unanimous approval of both houses of Parliament.

In other words, the apex court held that some features of the Constitution lay at its core
and required much more than the usual procedures to change them.

After the landmark case of Golaknath v. State of Punjab, the Parliament passed a series
of Amendments in order to overrule the judgment of the Golaknath case. In 1971,
the 24th Amendment was passed, In 1972, 25th and 29th Amendment were passed
subsequently.

The 29th Amendment was passed in the year 1972. It inserted the Kerala Land Reforms
Act into the 9th Schedule. It meant that the matters related to the Kerala Land Reforms
Act will be outside the scope of the judiciary to try. All the amendments which were
made by the Central Government in some or other way protected the amendments
made by State Government from being tried in the court of law. Provisions of the Kerala
Land Reforms Act along with 24th 25th and 29th Amendments were challenged in the
court of law.

On 21st March 1970, Kesvananda Bharti moved to Supreme Court under Section 32
of the Indian Constitution for enforcement of his rights which guaranteed under Article
25(Right to practice and propagate religion), Article 26(Right to manage religious
affairs), Article 14 (Right to equality), Article 19(1)(f) (freedom to acquire property),
Article 31 (Compulsory Acquisition of Property).

So the basic Issues before the Court were:-

The Apex court with the largest bench that had ever sat on an issue till that
the time arrived at a 6:5 majority and held that Parliament can amend any provision
of the Constitution to fulfill its socio-economic obligations guaranteed to the citizens
under the Preamble subject to the condition that such amendment won’t change the
the basic structure of the Indian Constitution.

laid down by the court that the “Doctrine of Basic Structure” is to be followed by the
Parliament while amending the provisions of the Constitution.

The Doctrine of Basic Structure

The phrase “basic structure” was introduced for the first time by M.K.
Nambiar and other counsels while arguing for the petitioners in the
Golaknath case, but it was only in 1973 that the concept surfaced in the
text of the apex court&#39;s verdict.

The court found that as contended by the respondents actually there is a difference
between ordinary law and an amendment. Keshvananda Bharti’s case to some extent
overruled Golaknath’s case. The court, in this case, answered the question which was
left unanswered in Golaknath’s case in relation to the power of Parliament to amend
provisions of the Constitution.

The court found that the word ‘amend’ which was included in Article 368 does not refer
to amendments that can change the basic structure of the constitution. If Parliament
wants to amend a particular provision of the Constitution then such amendment would
need to go through the test of Basic Structure.

The 1st part of the 25th Amendment was upheld but it was subject to the
provision that the prohibition of judiciary’s reach will be struck down.

Seven of the thirteen judges in the Kesavananda Bharati case, including the Chief
Justice Sikri who signed the summary statement declared that Parliament’s constituent
power was subject to inherent limitations. Parliament could not use its amending powers
under Article 368 to; damage, emasculate, destroy, abrogate, change or alter; the
basic structure or framework of the Constitution.

The landmark case of Kesavananda Bharti provided stability to the Constitution. The
the judgment that was given by the Bench, in this case, worked out to be a savior of Indian
democracy and saved the Constitution from losing its spirit.

Kesvananda Bharti is a landmark case and the decision taken by the Supreme Court
outlined the basic structure doctrine of the Constitution. The decision which was given
by the bench in Kesavananda Bharti’s case was very unique and thoughtful. The
judgment was 700 pages which included a solution for both Parliaments’ right to
amend laws and citizen’s right to protect their Fundamental Rights.
The Bench came up with the Doctrine of Basic Structure in order to protect the interests of
both citizens of India and the Parliament. The Bench through this solution solved the
questions which were left unanswered in Golaknath’s case. The Doctrine of Basic
The structure was introduced to ensure that the amendments do not take away the rights of
the citizens which were guaranteed to them by the Fundamental Rights.
While the idea that there is such a thing as a basic structure to the Constitution is well
established its contents cannot be completely determined with any measure of finality
until a judgment of the Supreme Court in this context comes out. Nevertheless the
sovereign, democratic and secular character of the polity, rule of law, independence of
the judiciary, fundamental rights of citizens, etc. are some of the essential features of the
Constitution that has appeared time and again in the apex court pronouncements.

The certainty that emerged out of this tussle between Parliament and the judiciary is
that all laws and constitutional amendments are now subject to judicial review and laws
that transgress the basic structure is likely to be struck down by the Supreme Court. In
essence Parliament&#39;s power to amend the Constitution is not absolute and the Supreme
The court is the final arbiter and interpreter of all constitutional amendments.