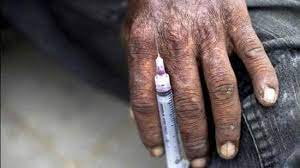 “The mentality and behaviour of drug addicts and alcoholics is wholly irrational until you understand that they are completely powerless over their addiction and unless they have structured help, they have no hope.”
― Russell Brand

Drug-use and drug-related criminal offending are among the greatest concerns of policy-makers, law-enforcement officials, scientists, physicians, and citizens alike. The relationship between illegal drug-use and criminal offending has been one of  the most widely studied and challenging issues within the criminology and other social  science and medical communities.

Similarly, in the 1980s, the crack-cocaine epidemic burst onto the  scene when crack addicted mothers were giving birth to crack-babies. In order to establish a causal relationship between illicit drug-use and violent behaviour, three criteria must be met.

White and Gorman (2000) explain the relationship between drugs and crime connection through three explanatory models:

1) substance use leads to crime,

2) crime leads to substance use

Behind the police raids, the FIRs, the deaths of addicts in jail, the big question that lingers over Punjab’s five-year crackdown on drugs is this: where do the drugs come from?

Punjab’s government and police say the answer lies at the 553-km-long international border with Pakistan and blame the Border Security Force (BSF) for not doing enough to curb drugs smuggling. The perpetual blame game is detrimental to a human life.   Punjab, the land of warriors, has been unfortunately marred by the problem of drug menace. The web of drug addiction has become extremely complex. The situation has become so grim that addicts sell their property to buy drugs. They even resort to snatching and robbery to fulfil their desires. In many cases, it is commonly seen that youngsters fall prey to the labyrinthine of drug mafia.

The AAP had made the drug issue the mainstay of its assembly election campaign in 2017. In the rallies, party convener and Delhi Chief Minister Arvind Kejriwal made the ‘patronage’ accusation against the Akalis.

The AAP also called then-revenue minister Bikram Singh Majithia, who had been summoned by the Enforcement Directorate in a drug-related case, the ‘kingpin’, and promised to ‘jail’ him the day the party came to power in Punjab. The issue resonated like no other with the masses and helped the party.

This time, though, it has been virtually silent on the issue and the allegations against Majithia. It has also suffered one leadership crisis after another, changing its leader of opposition twice and suffering a vertical split when Sukhpal Singh Khaira took away half-a-dozen MLAs and formed his own political outfit called the Punjab Ekta Party.

The Congress, which is now running the state, isn’t raising the drug issue for obvious reasons. The Congress had even gone to the extent of holding the ‘Gutka Sahib’ ( a collection of five Sikh prayers) and swearing to rid the state of drugs within four weeks of coming to power.